As I’m sure many of you will agree having a job as a Weather Man forecasting daily weather has to be one of the best jobs someone could land !  If they say it’s going to rain and it doesn’t, everyone is happy (especially this time of year) !     If they say there’s only a 10% chance and you get dumped on, well they said it might rain, their still not wrong and you’re still somewhat happy it didn’t last long !  If they say 100% chance of rain and you see a glimmer of sun you’ve still got hope the day can be saved !  So I say again how can you lose being a weather forecaster !

When we, Peg, my Grandson Logan and I left this morning I felt the day was going to be a wash ( Pun intended )  As we ventured down Rt 8 with boat in tow toward Rt 77 it was raining and pretty dark in the skies above, but we kept going !  Surly didn’t want to sissy out because of a few rain drops as I knew Mike & Judy Seachrist had poured his & her heart into preparing a great lunch as they always do and I know everyone appreciates all their hard work !  As we drove on,  there were those glimmers of blue skies and bit of sun shinning thru but as we got closer to Rt 212 toward Atwood Lake the skies darkened even more and I was sure we were going to get dumped on !

Pulling in to the Launch area I happened to glance at the outdoor temperature gage on the dash, it said 76* and the ski had opened up to sunshine and a beautiful blue horizon to west indicating it was going to improve, and it did !

Many of the gang were already there to include Jerry Kay with his great Grandson Jason and his cousin Zeke !  Jerry had called me while we were on our way asking to confirm we’d brought Logan ?  These three munchkins bonded like the three musketeers ready and game on for anything looking like fun !  First was a game of miniature Army men in Jerry’s boat. More on them later !

On to the flotilla,  With John Hagerman’s good memory and list of attendees I will try to add any he might have missed but am pretty sure he got most everyone ! John counted 22 boats brought by our members, I think this has to be an all time record !  Those that brought boats were ~  Mike Seachrist with his home built wood Raveau style and KG9 Merc, Me with my trusty Arkansas Travler and 16hp ScottAtwater, Terry Lane with his wood boat with an 18 Johnson, Bob Davidson with his PennYan & 18hp Johnson, Bob Korosa with his FeatherCraft & 18 Johnson, Don Moore with his MirrorCraft & a 10hp KG7 Merc, Bill Reed with his aluminum & a Mark 25 Merc John Hagerman with his aluminum & RD 20 16hp Johnson + his 25 Johnson, John Fairgrieve with his Feathercraft Vagabond & 25 Evinrude, Tony Torgerson with his FeatherCraft & Merc 25hp, Al Gammon with his little aluminum row boat with a 10 Evinrude, Chip Rabbit with his aluminum & 20 hp Johnson, Jerry Kay with his Chrestliner & 18 Evinrude, Dave Mettle with his aluminum boat and Merc Mark 25, Paul Wood with his Lonestar & 18 Evinrude, Domonic with his aluminum Pram & 9.9 Evinrude, TJ Fitzgearld with his aluminum with a 25 Evinrude, Jack Deck with one of their Hydros and a Merc Mark 20H, Dave Deck with one of their PickleFork Hydros and a KG7 Merc !  That’s only 19 If I missed a few I apologize !  Best the old memory can do !  Oops, forgot the WaterMellon Man,  Mike Conner Aluminum boat ? motor LOL! Another one I missed was Bob Saxvic HydroStream with a Johnson 25. The last one I forgot I think was Dan Curran but don’t remember what boat & motor he had if t was him ?  So that’s 22 Phew !

The fun was going out in my boat chasing Jerry with the three boys to get pictures, What I didn’t know was these evil little munchkins were loaded with squirt Guns that shot about 20 ft ! Yup they got me good !  But not to be out done I remembered my boathook also worked as a great squirter !  Retaliation and pay back !  Then they were off to the beach to go swimming !

During the squirt-gun fights the other members were racing around and having fun !  Only one engine failed in the water that I knew of and had to be towed in,  and it wasn’t a Merc, wasn’t a ScottAtwater, wasn’t an Evinrude, wasn’t an old Rd 20 Johnson either, but was a Johnson !  I won’t mention any names LOL but it was on a Wood boat !  Even some of the ladies got out for a boat ride, Peg & I cruised the shore line following Terry Lane and Marilyn !  John & Cindi Hagerman also cruised to the end of the lake and back “almost” on a single tank of gas !  Me too as I ran out about 2/3 of the way back, but that’s why you bring extra petrol !  Dom & MaryAnn ran around in Dom’s pram, boy that little thing is quick with the 9.9 on it !  Dom’s new name for it is the ” Pramulator ” !      My old Scott Atwater really surprised me that it ran as good as it did,  being I had to do some serious surgery to the magneto !  After waiting most of the summer for new coils (that never came) I changed it over to OMC coils and condensers best thing I could have done !

After we all raced around a couple more times it was back to the docks and dig into Mike & Judy’s great lunch ! Sloppy Joe, Pulled pork, potato salad, vegie tray compliments of my wife, Macaroni salad, deserts by Marilyn and ? another.   Chips and many other additions to the menu that people brought !  No reason to go away hungry !  After lunch it was out for some more runs and then in to pack up and leave for home !

Thanks, well deserved to all that brought additions to the lunch menu and those that brought Popup tents for the one little deluge Mother Nature gave us at the end of the lunch, refreshing with the heat of the day reaching into the mid 80’s !

Please check out the WRC web site ( wrcoutboards.org ) for pictures and comments about the meet !  And remember ~  Keep the Blue Smoke Flowing ! 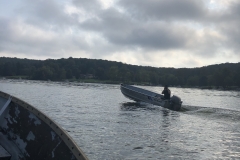 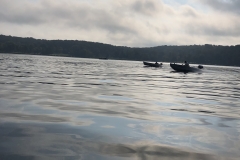 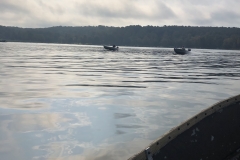 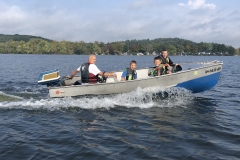 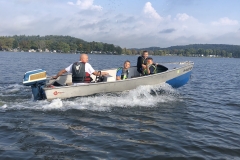 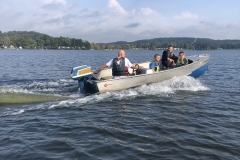 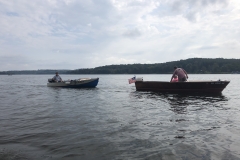 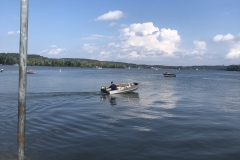 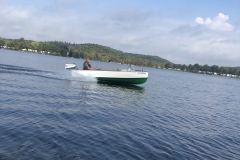 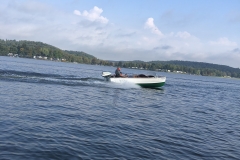 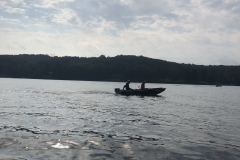